Where are you writing? 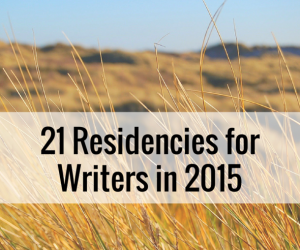 Where are you writing?  Aerogramme’s new list of retreats for 2015 includes Hedgebrook, an oasis for women writers near and dear to my heart: hard to get into (with 1500 applications this year!) but worth reapplying for, since, once you are a Hedgebrook alumna, you have a family for life.  I’ll be teaching there for Vortex with the amazing Ruth Ozeki, who just visited Goddard, where I am on the faculty of the MFA in Creative Writing program, on the coldest day in anyone’s memory in Vermont (minus 23).

At Goddard, we have just finished an action-packed week of writing, reading, learning, listening, dreaming, and thanks to Ruth, meditating our way into our stories so that we can access the world of our stories with our bodies. The MFA students are still talking about you, Ruth, and voraciously reading their new signed copies of A Tale for the Time Being.

If your writing life is inclined less toward a two year Masters’ program, and more toward a three day weekend retreat (and if you are female!) this year, Hedgebrook’s Vortex is offering small workshops, lectures and panel discussions with a new group of teachers, including Carole DeSanti, Dani Shapiro, Victoria Redel, and Hannah Tinti. What an amazing group of writers for a long weekend!  (Full bios and brand new workshop descriptions on the Hedgebrook website here.)  It would be lovely to see you there, in one of the most magical places I know.

Thank you, Hedgebrook, for the hollyhocks in my garden, and the Hedgebrook sisters in my email box, and the space to write and rewrite and have a manuscript to send out into the world today.  These flowers are for you. 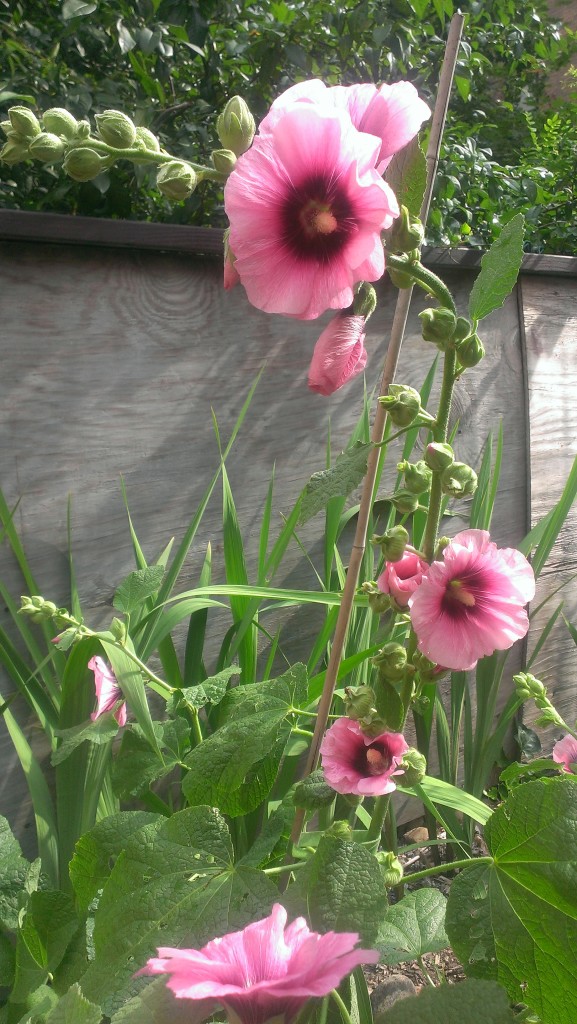 I am blessed with more than one in my life.  This one, Hedgebrook, I am privileged to share with so many amazing women writers, including some of the ones you see here: Holly Morris, Hannah Tinti, Monique Truong, Suheir Hammad, Gloria Steinem.  I am so grateful to Lisa Halpern’s magic in creating this documentary, which was aired on PBS on the Seattle Channel in May.  Thanks and love to Amy Wheeler, Vito Zingarelli and every single person on the amazing staff who make Hedgebrook happen every day.  And to Nancy Nordoff, who dreamed it and gifted her vision to us.

Everyone deserves to eat

I met Moses last night on the streets in the West Village where he is living.  He lost his leg and his mother when he was thirty five, and now he is over forty with a shiny prosthetic that hurts.  He carries four small plastic bags of stuff.  On the street, things get stolen.  Moses used to work as a carpenter; he believes in compassion; and the server at the restaurant we walked into to get him a hamburger told him she would not seat him until I made it clear he was with me and I was buying.  But then the manager came over and was very nice, and when I left, he thanked me for coming.  Moses’s drink of choice was water.  He is trying to get disability and social security and he has been denied, but he is still trying. His next hearing is on August 5th – my fiftieth birthday.  So if you have some light and love to share that day, please send them to Moses.

A friend of mine recently advised me that I should refrain from doing TV shows like 20/20 because “they don’t serve me” and they won’t sell my memoir.  But I don’t do them to serve myself, nor do I do them to sell my book.  If someone bought my book expecting it to be an inside look into the life of a noncustodial mother, they would be reselling it on ebay in short order.

Hiroshima in the Morning is about motherhood, yes.  How I didn’t want to be a mother, how I had to reconfigure motherhood in order to remain in the lives of the children I loved, about losing my own mother to Alzheimer’s.  But it’s also the story of finding oneself in a new place, about Japan, war, history, storytelling and memory.

As for serving myself, my motherhood is one aspect of me, and as my boys grow up and start looking at college and find summer jobs halfway across the world, my role in their lives is changing.  In two short years, public response to my family is radically different; it has moved from outrage to gratitude.  There are many women out there who are tired of equating female and sacrifice.  As one friend pointed out, we readily agree that we should put on the oxygen mask first so we can help others in the case of an airplane emergency.  Why is it so hard to accept that a woman might be more than a mother, and that that ‘more’ might enrich her family as well?

I speak out because no one else is asking: What if nurture wasn’t considered feminine?  How much better would our society be?  How many women, families and men would be allowed to bloom and create their lives as best serves them?

Nurture and love should be the priorities for our society.  And as our social contracts break down and we decide we are too poor and threatened to fund education, or make sure our citizens have a place to live and food to eat, or to stop poisoning our environment because that costs more; as the gap between rich and poor becomes dangerously large; it is too easy to point to women and put the burden for nurture on their backs in the name of the “mothering instinct.”  That is very clearly not serving us.

We need a new paradigm.  And watching the old one kick and fuss on its way to extinction is a very good sign.

“What got into her?”

Should a mother love her children more than herself? Shouldn’t mothers sacrifice for their children? Put care for her children ahead of care for herself? What is society telling us a mother should be, and what does that say about how we value women?  Moms Moving Out, 20/20 ABC-TV asks Talyaa Leira and me these questions and more.  Watch here:

Jun 13, 2013 | Events, Hedgebrook, Hiroshima in the Morning, The Writing Life

“What would happen if one woman told the truth about her life? The world would split open.” ― Muriel Rukeyser

Storytelling is a radical act. By sharing our own truths, we can heal, reveal, inspire, and challenge: literally recreating the world. In memoir, honesty is everything, but re-living our experiences and turning life into art can be one of the most challenging things we do. This workshop will help you find your central question and use it to find the shape of your manuscript. You will learn to be kind to your characters (including yourself) and also ruthless. You will balance an immersion into your past with the safety of the present. We will talk about placing your personal story in a broader social context.

Join me in one of the world’s most idyllic writing settings, Hedgebrook, the retreat that supports extraordinary work by visionary women.  More information here, and on hedgebrook.org.

Once upon a time, when I was in a moment of artistic crisis, a dear, talented, compassionate and necessary writer told me this:  “We write to clear a path in the forest that others may follow and then step off of to create their own paths.”

Today, on her blog, she writes, “What troubles me about rejections is that perhaps the audience I imagine for this work is not right, or doesn’t exist.  Maybe I’m the only one interested in the things I write about.  And if I am my only reader, then I don’t really need to write it, do I?”

Last night, I was reminded of the story of the Emperor’s new clothes, and how it takes only one small voice saying “Look at that man’s dinky!” to show us all, immediately, that we are being lied to.  We ARE being lied to.  The artist is the person who knows.

You are not your only reader, Elena.  You are not the only one interested in identity and fitting in and cruelty and family and isolation and food and inheritance and war and trauma and equality and racism and freedom and love and all the other things you write about.  We live in a society in which we all agree that Monday morning is the time we get up and go to work, and that work and what we get paid for it is the measure of our self worth.  That is only an agreement – and a silly one at that – and we can change it anytime we decide to agree on something else.  But without artists, we will never see the nakedness of our arbitrary collective decisions and make a change.

On CNN/Opinion today, a piece about motherhood.

When Brenda Heist, the latest “runaway mom” reappeared, I was drawn back to the response I got to my own story of “leaving my children.”  Yes, there were the threats, but there were also many women who showed me that I was not alone.  From the article:

“‘There is such a horrible stigma to not being a full-time mother, and I tend to shy away from letting the mommies in my online parenting community (which I’ve been with since they were infants) know that I’m choosing not to have the kids live with me. It’s looked at as such a selfish decision, but I chose it because it was truly best for them, even though it does cause me intense pain.

“‘So again, thank you for speaking up, and giving me reassurance that my kids will not be permanently damaged by not living with me, but that doing the best I can for them and myself will make them more successful in the long run.'”

Thank you for writing, each and every one.  I have not forgotten your words.

Full article can be found here.

112 Olympic-size pools of radioactive water, and more every minute

We knew this was coming, but where do we go from here?

After dumping 11,500 tons of radioactive water into the sea within a month after the Fukushima meltdown began, in violation of international law, TEPCO continued to store a flood of radioactive water, assuming that – someday, somewhere – it could be cleaned and disposed of.

From the New York Times on Monday:

“Groundwater is pouring into the plant’s ravaged reactor buildings at a rate of almost 75 gallons a minute… A small army of workers has struggled to contain the continuous flow of radioactive wastewater, relying on hulking gray and silver storage tanks sprawling over 42 acres of parking lots and lawns. The tanks hold the equivalent of 112 Olympic-size pools.

“But even they are not enough to handle the tons of strontium-laced water at the plant …. In a sign of the sheer size of the problem, the operator of the plant, Tokyo Electric Power Company, or Tepco, plans to chop down a small forest on its southern edge to make room for hundreds more tanks, a task that became more urgent when underground pits built to handle the overflow sprang leaks in recent weeks.

“‘The water keeps increasing every minute, no matter whether we eat, sleep or work,’ said Masayuki Ono, a general manager with Tepco who acts as a company spokesman. ‘It feels like we are constantly being chased, but we are doing our best to stay a step in front.'”