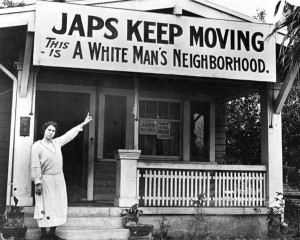 (reposted from The Writer in the World, the blog for the Goddard College MFA in Creative Writing Program.)

Last week, I was invited to talk to a class at City College in New York. Someone asked me about structure; specifically what I thought of the fact that none of the books on their syllabus, including my memoir, had a traditional structure. It wasn’t until that moment – when I learned that the class I was visiting was called Reading/Writing the Asian American Diaspora – that I considered that my own obsession with fractured structures might be more than individual taste. I am writing from the margins, about otherness, about race. How could I do that with one voice?

One voice is representation. One voice could be all there is. It is only through a multitude of voices that we can get a truer picture of who we are.

This is not a problem faced by those writing about a mainstream, dominant culture. It is essential, though, for those whose stories have been erased, or defined falsely; whose histories have been rewritten. For me, as a half-Japanese American (Hapa) woman from Hawaii, my subjects are secrets, missing inheritance, and erasure because these are part of my family legacy. I write to discover. And the artist in me creates my structures so that my readers will experience that as I do.

My first novel, Why She Left Us, was inspired by my discovery that my Japanese American infant mother and her family were interned behind barbed wire in a camp in the middle of America during Word War II. I quit my job and traveled through time, across the country, to a place of tumult and shame, where people were treated like criminals and stripped of their citizenship, possessions and dignity because they looked (physically, in the way we choose to differentiate people) like the enemy. I found a history of racial discrimination and hatred that had been stripped out of our America-is-the-good-guy narrative, that was not spoken of in families. My answer to “Who am I?” was incomplete until I listened: to the many former internees who shared their stories with me, their secrets, a passing window into their lives.

Splintered truths, disappearances, mysteries: was it any wonder that the structure of my first novel reflected all of these? There was no single “what happened.” There was, and is, a still-shifting, still-surfacing truth. 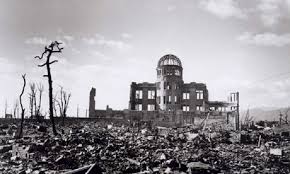 My memoir, Hiroshima in the Morning, also deals with an erasure: the experience of what happened when the first atomic bomb was dropped on people. Again, this history was redacted not only in our textbooks, but also in families, mine included. The survivors’ – the hibakusha’s – stories had been stifled by death, family, time, and repetition, but the facts were censored from the beginning by the U.S. government, which confiscated pictures, film, and restricted journalists’ movements and stories. The very few accounts that are available are representations of scientific achievements, a life-saving victory, a generous American response to rebuild the faces of a handful of long-suffering “maidens.”

These are not the only stories.

Perhaps because I am the child of a mixed race marriage, I feel these stories slipping away, a drop of ink dissolving into water. I write about them, not as a historian or to establish facts, but because we hide what we are ashamed of. And in our sweeping human history of what “we” did to “them,” our most powerful justification is explicitly or implicitly the concept of race.

Race is not biology. It is a social construct that we use to separate. But it is not the only one. We define all sorts of categories, roles and identities (even motherhood!) to separate ourselves from ourselves: to belittle, or reward, or limit, or control. The beauty of Goddard College is that it attracts writers, thinkers, people who are trying to overcome divisiveness by finding common ground in difference. Another way to say this? MFA students come to Goddard because they have something to say – a way of seeing the world that is uniquely theirs and that they want to share. They don’t come to write like someone else, nor do they come to tell a story that has already been told. They are standing in the margins – whether one we already have a reductive label for, or from a line of sight and an experience that is entirely their own – and they are doing it on purpose to shift their readers’ reality. It is the artist’s calling, and her gift, to challenge our assumptions, to rewrite the victors’ history, and to remind us that the destruction that we cause is our choice and the categories we force upon each other are our fiction.

That’s why we write. And, maybe, why some of us in the “Asian American Diaspora” choose a multiplicity of voices and non-traditional narratives to offer a glimpse into what our collective humanity might look like from a different point of view.

For more posts about writing, and to get a look inside the Goddard Creative Writing Program, please visit our blog: thewriterintheworld.com