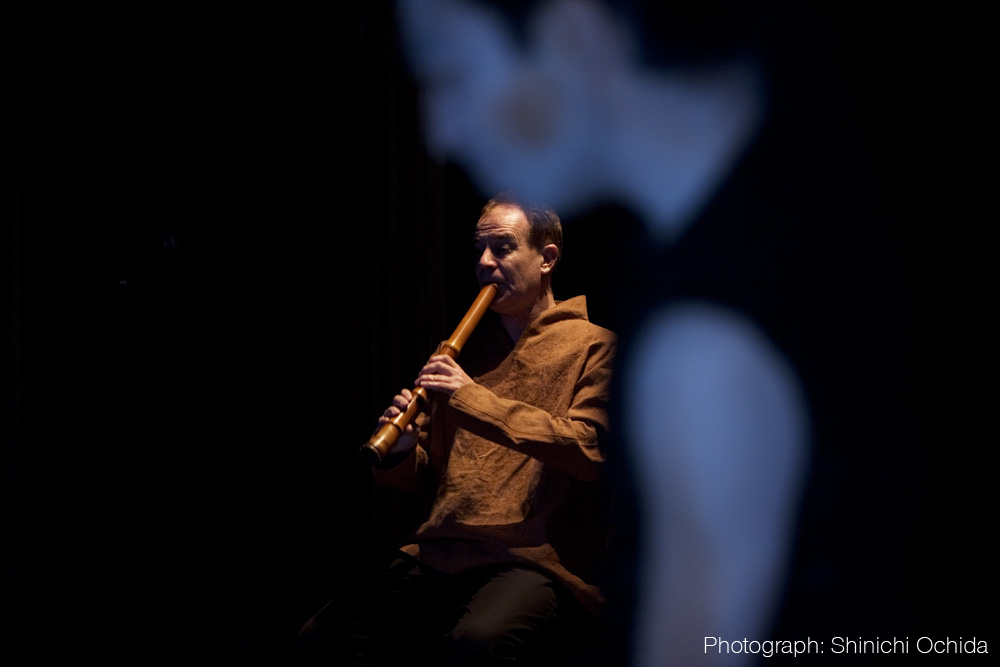 The first thing I hear is the sound of a Hawaiian conch – low and heavy, gaining strength as it bears down on me, and then fading into breath. This is a sound I recognize; a sound I last heard rolling off an outrigger canoe at sunset on a beach on the Big Island, welling in our hearts like tears.

But before I can pronounce it – that this is what the shakuhachi sounds like – it sweetens. Rises. It is now more like the flutes that I am used to hearing, swirling with the dancer who has just appeared in the doorway, but still, it isn’t clear. It’s full of scratches, whispers, gusts of breath, as if the music is being whistled through a blade of grass. It doesn’t seem quite “right” to my ears; it sounds like he missed, like perhaps he should have warmed up for a few minutes instead of eating lunch with me and then getting so lost in the cramped, convoluted streets of Shitamachi – one of the few parts of Tokyo that survived the fire bombings of World War II – that we had to use the cell phone to call for someone to ride over on a bicycle to guide us here.

But we are here now, in a tiny café that could fit easily into any storefront in New York’s Greenwich Village with its rich espresso, and carefully fabricated slices of layer cake, and tiny tables. The room is smaller than my bedroom, and has maybe 40 people in it – 40 chairs, 10 tables, and one very narrow passage that has been cleared for the dancer. Christopher is sitting in a chair against the back wall – he and I are the only foreigners in the room though in fact I am the only one since I have barely arrived in Japan and he, after 30 years here, is probably more immersed in the culture than many of the people who have come to listen to him – and I have a chair almost directly in front of him, with the best view of his fingers on the four top holes of the bamboo flute as their infinitesimal movements change the tone and tenor in the room. I am concentrating, trying to link sound to the movement so that I can understand, so that I can say something meaningful afterward to prove that I was listening. Christopher had told me that I have heard shakuhachi music before – they use it a lot in movies, he said – and now I remember: foghorn blasts through the mist that covers the skin of the sea, warning of ghosts from the past more than rocks under the waves; and the night’s arrival in the forest. This sound is the mourning of every celluloid Native American, every sunrise over the desert, every shattered heart bidding farewell. It is life, hope, love fading… And then I notice. The sound hasn’t died. There is still a whisper, maybe just a vibration, filling the air. It doesn’t give up, and it isn’t one-sided either – the shakuhachi, at least the way I suddenly hear it, requires the “misses” I heard before, it relies on breath, even Christopher’s inward breaths which are as musical as the new and sudden burst of music around me, the high notes that soar out of the momentary quiet, of birds heading south for the winter to be reborn through their babies. The music flies into my head, high and fast; it dances and warbles; it sets me on the back of a bird and takes me with it over the horizon.

And just when I have relaxed, finally, and I can truly hear the shakuhachi; just as I have begun to trust this voice that I have never heard before; just as I can lose track of Christopher’s hands on the bamboo and let the labels fall away completely…