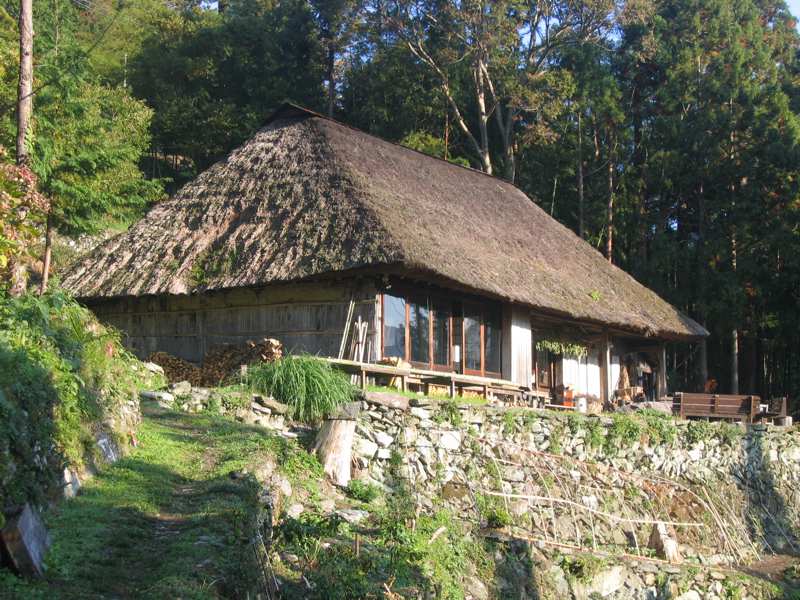 In the morning, Chiiori is bright. The sun backlights the thin, straight trunks of the cedar trees and sets a fiery aura around each one. From our beds, we can hear Keiko and Hana laughing with a neighbor over the whistle and screech of the hawks. When we emerge, they suggest we drive to see the Oku Iya Kazurabashi, the famous twin vine bridges a mere 14 kilometers away, which were built by the retreating Heike clan some 800 years ago. After that, we should have “shishi udon,” wild boar noodle soup. The neighbor hands us a well-folded, hand-drawn map with a small drawing of a wild boar and an arrow pointing off the paper’s edge. He assures us we can’t miss the building: it will be the only one in sight.

It is nine a.m. when we leave Chiiori. We give ourselves over to the day, to the drive, to a map that is unevenly out of proportion. The 14 kilometers through the back reaches of Iya take us an hour and a half to travel, but still we find the bridges and have them almost to ourselves. It is just after noon when we get back to the turn off for the restaurant. We pass a few buildings immediately, and then, forest. We relax into the road, which is often dirt. Ming’s warning honks grow less frequent as he gauges the turns; the only sign of human life is an occasional deserted logging site. For almost an hour, we avoid the obvious – where is this restaurant? – but as the time on the dashboard clock ticks on, my doubts return.

As two o’clock approaches, we are nearing what seems to be the top of the mountains. We pull over to enjoy the view: row after row, the ridges we have been driving through for hours fade from green, to brown, to purple, to the horizon. We share a Japanese pear, the only food we have in the car. We have no water, no telephone numbers to call.

We have plenty of gas, though, and Ming suggests that we go just a little further. The highest peaks are within sight; at least we can say that we reached the top of the pass. We drive another ten minutes, now almost two hours into the wilderness, and at the very top, around a blind corner and just as we are about to tip down the other side, there is, indeed, a tiny shack with a wild boar flag outside it, and a truck just leaving the small parking lot. Ming takes his foot off the gas, and we coast, silent, as the sight sinks in. We’d given up by then; we were no longer looking. Inside the restaurant, the wall on one side will be papered in letters from past customers, many in English and most written on a copy of the same hand-drawn map we followed. On the other side, a half-wall of plate glass will look out on houses sprinkled all the way down the other side of the mountain, at a thriving population in a direction we never dreamed could be real.