Sixty-six years ago, more than 60,000 people killed in an instant

A moment of silence for the anniversary of the bombing of Nagasaki.

In the words of Harry S. Truman, our President, on August 11, 1945, explaining the use of the two atomic bombs:

“The only language they seem to understand is the one we have been using to bombard them.

We are being lied to

A round up on the English-language news about the Fukushima disaster and the state of our own nuclear power plants.

“In interviews and public statements, some current and former government officials have admitted that Japanese authorities engaged in a pattern of withholding damaging information and denying facts of the nuclear disaster — in order, some of them said, to limit the size of costly and disruptive evacuations in land-scarce Japan and to avoid public questioning of the politically powerful nuclear industry.”

“Japan’s Parliament passed a law on Wednesday that will allow the use of public funds to shore up the company operating the crippled Fukushima Daiichi nuclear plant, and help it pay what is expected to amount to billions of dollars in compensation claims.”

“A 60-minute exposure could kill a man or woman within weeks.”

“Japanese agricultural officials say meat from more than 500 cattle that were likely to have been contaminated with radioactive cesium has made its way to supermarkets and restaurants across Japan in recent weeks….If you eat it every day, it might be a problem,” Goshi Hosono, the minister in charge of the nuclear issue, said last week. “But if you eat just a little, there would be no big effect on your health.”

“Radioactive tritium has leaked from three-quarters of U.S. commercial nuclear power sites, often into groundwater from corroded, buried piping, an Associated Press investigation shows. The number and severity of the leaks has been escalating, even as federal regulators extend the licenses of more and more reactors across the nation…

“You got pipes that have been buried underground for 30 or 40 years, and they’ve never been inspected,’ whistleblower says.”

“Thousands of engineers and labourers have been lured by higher wages and a sense of duty…They include Ariyoshi Rune, a tall, wiry 47-year-old truck driver whose slicked-back hair and sideburns are inspired by his idol, Joe Strummer…For five days a week, Rune is in thrall to the drudgery of life as a “nuclear gypsy”, the name writer Kunio Horie gave to contract workers who have traditionally performed the dirtiest, most dangerous jobs for Japan’s power utilities. “I have about two months left before I reach my limit, but I’m hoping they will make an exception and let me work for longer,” he says.”

Aljazeera: Fukushima: It’s much worse than you think
By Dahr Jamail, 16 June 2011

“Scientific experts believe Japan’s nuclear disaster to be far worse than governments are revealing to the public….We have 20 nuclear cores exposed, the fuel pools have several cores each, that is 20 times the potential to be released than Chernobyl,” said Gundersen. “The data I’m seeing shows that we are finding hot spots further away than we had from Chernobyl, and the amount of radiation in many of them was the amount that caused areas to be declared no-man’s-land for Chernobyl. We are seeing square kilometres being found 60 to 70 kilometres away from the reactor. You can’t clean all this up. We still have radioactive wild boar in Germany, 30 years after Chernobyl.”

“Hisao Nakamura still can’t accept that his crisply cut field of deep green tea bushes south of Tokyo has been turned into a radioactive hazard by a crisis far beyond the horizon.

“I was more than shocked,” said Nakamura, 74, who, like other tea farmers in Kanagawa has been forced to throw away an early harvest because of radiation being released by the Fukushima Daiichi plant 300 kilometers (180 miles) away…The incomplete data has complicated Japan’s response to the disaster and planning for an environmental clean-up expected to take years and cost tens of billions of dollars.

“It has also created a mood of quiet despair in already devastated communities. “I never believe anything I hear any more on radiation,” said Shukuko Kuzumi, 63, who lives in Iwaki, about 50 km to the south of Fukushima.

“I want to dig a hole in the ground and scream.””

“According to test results announced Saturday, samples of cow milk from Kawamatacho, Fukushima Prefecture, and spinach from six cities, towns and villages in Ibaraki Prefecture were found to contain radioactive iodine and other radioactive materials in excess of provisional limits, officials said….In Ibaraki Prefecture, radioactive iodine was detected from spinach sampled from farms in Hitachi, Takahagi, Hitachi-Ota and Hitachinaka cities and the town of Daigomachi and the village of Tokaimura. The highest level found was 15,020 Bq, 7.5 times the permissible level…There is no direct risk to human health from the latest radioactivity findings involving cow milk and spinach, according to Prof. Gen Suzuki of the International University of Health and Welfare.”

“If we hear that exposure is “within legal limits” anytime soon, let’s remember this from the Washington Post: “Japan’s Health and Welfare minister had to waive the nation’s standard of radiation exposure, increasing levels of acceptable exposure from 100 millisieverts to 250 – five times the level allowed in the United States.”

Thought for the Day

“In the Babemba tribe of South Africa, when a person acts irresponsibly or unjustly, he is placed in the center of the village, alone and unfettered. All work ceases, and every man, woman, and child in the village gathers in a large circle around the accused individual. Then each person in the tribe speaks to the accused, one at a time, recalling the good things the person in the center of the circle has done in his lifetime. Every incident, every experience that can be recalled with any detail and accuracy, is recounted. All his positive attributes, good deeds, strengths, and kindnesses are recited carefully and at length. This tribal ceremony often lasts for several days. At the end, the circle is broken, a joyous celebration takes place, and the person is symbolically and literally welcomed back into the tribe.”

– Jack Kornfield, On Forgiveness, excerpted in Transforming Terror: Remembering the Soul of the World, edited by Karin Lofthus Carrington and Susan Griffin.

From Beth, in Berlin 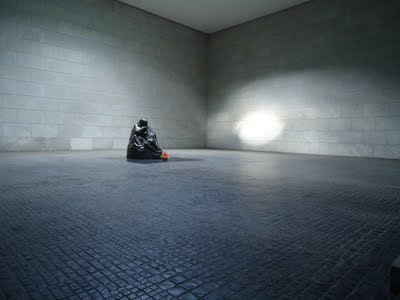 “A consecration. A silence.

“This is the German war memorial, a mother holding her son.The ground below has the remains of a German soldier and a holocaust victim. The earth is from both a battle ground and a concentration camp.”

Truly a Chorus of Stones.

“The heart has reasons that reason does not understand.”

I have ordered my copy of Transforming Terror: Remembering the Soul of the World, edited by Karin Lofthus Carrington and Susan Griffin, University of California Press.

In their own words:

“Over the last decade, whether in Palestine or Israel, Mumbai or Pakistan, Baghdad or Kabul, Rwanda or the Sudan, the United States, Spain, or Great Britain, we have witnessed a vicious cycle in which terrorism causes terror and the experience of terror seeds acts of terrorism. And yet, though the human emotions we all share— fear, grief, and loss— are so clearly part of this murderous equation, in delineating and defining this violence rarely does society consider the experience of terror that lies at the heart of terrorism.”

Heart and humanity are at the center of my writing. I am looking forward to reading this book, and to using it as an inspiration for an upcoming presentation I will be giving at the University of Connecticut at Storrs on September 15 on the multivalent meanings contained in the still-evocative term, “ground zero.”

Buy the book. Read it with me. Tell me what you think.

May 18, 2011 | Hiroshima in the Morning, Motherhood in the Media, Our Nuclear Age

My Mother’s Day interview with Sherry Bracken has been posted on The Big Island News Center.  You can listen to the half hour discussion here.  We talk about everything from astrophysics, to my mother, to the inspiration for my first novel to Hiroshima in the Morning.  She is a thoughtful, warm and very smart interviewer.  Thanks Sherry!