Here are the links and sources for some of the statements I made in my last two articles on the Fukushima disaster.  You can find the articles on the Progressive Media Project and The Huffington Post.

1.    White House Press Release about the bombing of Hiroshima.

2.    Speechwriter McGeorge Bundy’s role in the statement of the number of causalities avoided by the atomic bombings, as discussed by Kai Bird and Martin J. Sherwin coauthors of “American Prometheus: The Triumph and Tragedy of J. Robert Oppenheimer.”

3.    The American Nuclear Society’s report that American nuclear plants are safe, and that “the off-site health consequences” of the Fukushima meltdown “may ultimately be minimal.”

4.    The Associated Press report that three quarters of the U.S. nuclear plants were leaking radioactive tritium.

5.     TEPCO plans to “contain” the radioactivity in the nearby bay by cementing it over with 73,000 square meters of cement.

7.      My article on the effects of radiation on survivors of Hiroshima published last year after the Fukushima disaster.

9.     Japanese government delays release of information on telltale signs that the Fukushima reactors has melted down for months.

10.   Japanese government increases acceptable levels for radiation exposure to five times that in the U.S.

11.    When radiation in spinach, milk and beef exceed legal limits, the Chief Cabinet Secretary says “Even if people eat these products, there will be no immediate effect.”

12.    When high levels of radiation are detected in tea in Shizuoka, the governor declares the tea safe and refuses to have it tested further because it might “confuse” people.

13.    The Japanese government loosens the definition of “cold shutdown” in December in order to declare its leaking, vulnerable, still-actively-being cooled reactors “stable.”

15.     The U.S. has generated approximately 71,862 tons of waste and has nowhere to store it; three quarters of it sits in over-capacity water-cooling pools like those in Fukushima.

18.     The U.S. approves the first nuclear power plant since the 1970s, with an 8.3 billion federal loan, despite an objection by NRC Chairman, Gregory Jaczko, who requests that enhancements and improvements based on the lessons of Fukushima be implemented.

19.      Water used to cool the fuel has been measured at up to 7.5 million times the legal limit for radiation.

20.     The Japanese government deliberately dumps 11,500 tons of radioactive water into the sea in April (calling this act “regrettable and unfortunate” and also mentioning that it was carried out “at the strong urging of the U.S.”).

A Conversation with Sixers Review

Jan 19, 2012 | Hiroshima in the Morning, Motherhood in the Media, Our Nuclear Age, The Writing Life

Appearing in Sixers Review today, a brief conversation with Goddard MFA graduate, Shokry Eldaly, who will someday be a literary marvel himself when he gets that half-finished novel done. Here is a sneak peek:

“Are you asking what you do when you are asked to conform? You don’t. It’s very simple. Why would you? Why would any person ever think that another person, or a structure (like publishing, or banking!), or a cultural assumption, knows what you need and who you are better than you do? You are the expert on you, and you have an urgency in your own preoccupations that is important for the rest of us to hear about. Otherwise, you become a bad copy of a character that someone else has made up.”

Read the entire interview and take a look at the journal here.

Blast from the Past

Nov 5, 2011 | Events, Hiroshima in the Morning, Our Nuclear Age, The Writing Life

Here is an interview I did with Rachel Glass for Evergreen Radio/WTBBL in Seattle last year, before the motherhood explosion, when the conversation was really about Japan and the atomic bomb and writing.  It’s quite interesting to go back in time.  When Rachel and I sat down, we discovered, of all things, that her parents knew my parents in the old days in Hawaii.  It is, especially in the islands, a very small world.

The MP3 link is here.

Oct 25, 2011 | Events, Hiroshima in the Morning, Motherhood in the Media, Our Nuclear Age, The Writing Life

Part Two of The Open Mind interview with Cecilia Skidmore is now on line.  Download and listen to both here.

Today on the Open Mind

Oct 16, 2011 | Events, Hiroshima in the Morning, Motherhood in the Media, Our Nuclear Age, The Writing Life

I will be talking with Cecilia Skidmore on The Open Mind on WGVU Radio today and next Sunday. Her program complements a national PBS series called Women, War and Peace. Listen in to the streaming broadcast online, or download the segment at your convenience.

A beautiful tribute, and a chance to help

The crisis in Japan is far from over;
it may be gone from the headlines,
but it is not gone from our hearts. 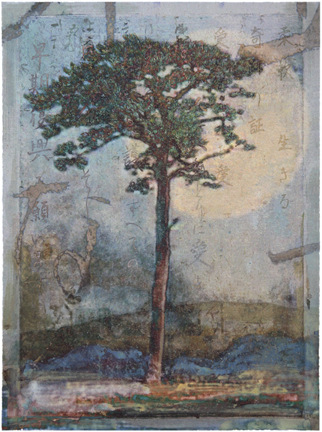 Donald & Era Farnsworth’s Sacred Pine depicts a pine tree in Rikuzentakata, Japan, a coastal city almost completely flattened by the tsunami following the 2011 Touhoku earthquake. Incredibly, this single pine was left standing from a grove of more than 70,000 trees planted along the shore three centuries ago; the tree has emerged as a symbol of hope and renewal in an otherwise devastated region.

For more information, to purchase or make a donation, (or to investigate my tiny connection to this beautiful work) click here.