A Tale For All Times and Beings 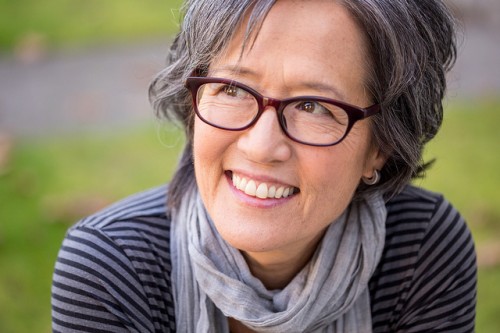 Ruth Ozeki is a critically-acclaimed filmmaker and novelist, and a Zen Buddhist priest. Her first two novels, the Kiriyama Prize winner My Year of Meats and American Book Award winner All Over Creation, have been translated into eleven languages and published in fourteen countries, and her documentary and dramatic independent films, including Halving the Bones, have been shown on PBS and at the Sundance Film Festival. I had been waiting for a decade for Ruth’s next book and was thrilled to be able to interview her about her just-released novel, A Tale for the Time Being. Here, Ruth talks about being a writer (and a thinker) in the world first, and how that writer and her preoccupations end up on the page.

In A Tale for the Time Being, you have created a fast-paced and deeply moving story that is also an impressive balancing act: the novel weaves together a Japanese school girl, a 104-year-old Buddhist nun, the Tohoku earthquake and tsunami, the Japanese kamikazes of World War II, and the Great Pacific Garbage Patch…among other things. Novels about issues are hardly new for you; you took on the meat industry in My Year of Meats and genetically engineered produce in All Over Creation. Do you think of yourself as an activist? How do you thread your concern with environmental and political issues into your work?

Ruth Ozeki: I always start with the voice and the character, and the issues are secondary…no, tertiary…actually, I don’t think about the issues at all, and I’m always surprised when others do. When I wrote My Year of Meats, I remember going into my first marketing meeting and Viking team was really happy because there were so many issues in the book that would generate marketing angles, and I was like…huh? Issues? What issues? I didn’t get it.

To me, the so-called issues are just things that I’m interested in, or thinking about, when I’m writing, which then find their way into the books. I look at writing as a vehicle for working out questions or problems. Writing fiction is my way of thinking. It’s very concrete. What do I think about the meat industry? What do I think about commercially sponsored media? What do I think about genetically modified crops? How do I feel about the bully culture we live in, about suicide bombers, about the 2011 tsunami and meltdown at Fukushima?

The novel provides the excuse and the container for researching and investigating these questions, but this is going on in the background. In the foreground is the character, or characters. Usually I will “hear” them, first. A young girl, who announces herself, “Hi. My name is Nao, and I’m a time being. Do you know what a time being is? Well, if you give me a moment, I will tell you.” And then I work from there.

Writing a novel is a way of acting out, on the page, a series of very concrete what if? propositions. What if a TV producer found herself in an ethically compromised position on a feedlot? What if a group of environmental activists decided to make a potato farmer in Idaho a poster child for their cause? What if a diary washed up on my shoreline?

So I’m not an activist. I am not trying to convince anyone to believe anything or to think in certain ways or, god forbid, to teach anyone anything. What do I know? I’m just sharing the way I think about things.

It’s been close to a decade since your last novel was published. Tell me about the vision and re-envisioning process that went into this book.

Ruth Ozeki: I can date Nao’s voice back to the fall of 2006. That’s when I first heard her, and that’s when I wrote down those first lines. But I can also trace a lot of what wound up in the book to earlier times. I’d been haunted by the diaries of the Japanese kamikaze pilots ever since I first started reading them in 2001. And, too, my interest in human-computer interface design started back in 2005, when I was the Katzenstein Artist-in-Residence at MIT.

This novel emerged very slowly. I knew from the first that one of the protagonists was a young girl, Nao, who is writing a diary. I knew that Nao was speaking across time and that she needed a reader. My first impulse was to put myself in the novel, but then I rejected this idea because it felt too self-conscious, metafictional and annoyingly PoMo, so I set about auditioning other readers for Nao. I went through four or five Readers, each one worse than the next. Some were female, most were male, one was some kind of amorphous, ageless, unformed smear of a character, neither male nor female, who lived in a library.

By end of 2010, I finished a draft I was reasonably happy with, or if not happy, at least I felt I’d gone as far as I could go by myself. I submitted it to my agent and we were getting ready to submit it to my editor when, in March of 2011, the earthquake hit Japan, followed by the tsunami and the meltdown at Fukushima. Day after day I watched this disaster unfold. It was absolutely terrifying and heartbreaking. Over night, everything had changed. Japan had changed. The world was no longer the same, and a byproduct of this seismic upheaval was that the novel I’d written was now utterly irrelevant. So I withdrew it.

That May, I went back to work. The novel is told as a kind of dialogue, with two interleaved voices, Nao and the Reader. I realized that Nao’s voice was still fine. The problem was the Reader I’d written. So I unzipped the manuscript, threw away that Reader and stepped into the role myself, as the character of Ruth. What had felt gratuitous and self-conscious five years earlier, now felt necessary. Stepping into the role myself and responding to it seemed to be the only way of acknowledging the magnitude of the disaster, and once I did this, the writing came very very quickly. I started in May and finished in November.

In the novel, the character of Ruth has writer’s block. She is struggling and failing to write a memoir. She is worried about her mind, that she might be losing it. Is any of this true to life?

Ruth Ozeki: Yes, this part of the book is quite true to life. I’d been trying to write this novel for many years and failing, for all the reasons I’ve already mentioned. At the same time, I thought it might be interesting to write a memoir about taking care of my mother, and about the ways that caretaking had encouraged my spiritual practice and my decision to ordain as a Zen priest.

My mother had Alzheimer’s. For over a decade, I’d been watching the slow deterioration of her mind. I became very conscious of the way the disease works and worried that something similar was happening to me. I was having a terrible time focusing, and there were times when I was afraid I was losing my mind.

You know what it feels like when your arm falls asleep and you try to make a fist but you can’t? That’s how my mind often felt: like a hand that can’t grip. My journals from that time are filled with adjectives like foggy, scattered, distracted, vague, fuzzy, fractured, fragmented. I thought about getting genetic testing, but if I had Alzheimer’s, did I really want to know? Maybe it was menopause, or ADD, or just garden-variety grief and depression.

The loss of mental focus was affecting my writing. I’d write a couple hundred pages and become overwhelmed. I thought I’d lost the capacity to hold complex fictional worlds in my mind. I was pretty sure I’d never finish another novel.

But then, luckily, I went on a writing retreat, where I had limited access to the Internet, and I realized that there was nothing wrong with my mind that three weeks offline and long unscheduled days of writing wouldn’t fix. This was in 2009. I was able to go back to the novel, penetrate the material, and find my way through.

You and I met through Hedgebrook (a writing retreat for women off the coast of Seattle and the hub of a growing community of  “visionary women writers whose stories and ideas shape our culture now and for generations to come.”). Tell me about what retreat – and community – mean to you as a writer.

Ruth Ozeki: Yes, Hedgebrook was my salvation! I’m pretty sure I would not have finished A Tale for the Time Being had it not been for the serendipitous retreat at Hedgebrook. I’ve never been anyplace where I’ve felt so utterly supported as a writer, and this was part of what helped me find my way back to writing novels. So I think Hedgebrook is a miracle, and the community of writers I’ve found there has been miraculous, too. It’s like in bike racing, when you’re cycling in a pack with other riders. When I’m at Hedgebrook, I feel like I’m drafting the energy and momentum of the other writers. Of course, the writing work itself has to be done alone, but the company of other writers reduces the resistance and pulls you along.

I often teach master classes there, but I also had the great fortune to be invited to attend one given by Karen Joy Fowler. She is an astonishing writer and teacher, and if you ever get a chance to take a class with her, you should. This was in May of 2011, after the earthquake and tsunami, after I’d unzipped my manuscript and thrown half of it away. Karen helped me find the courage I needed to begin again. I will always be grateful to her for that.

You are ordained as a Zen Buddhist priest and Buddhist philosophy plays a big role in A Tale for the Time Being. How has becoming a priest influenced your writing? How are your roles as writer and priest related?

Ruth Ozeki: This question is complicated and also very simple. The simple answer is that the two, writer and priest, are the same. I am just one person, just one time being, so how could there be a difference?

My interest in Buddhist philosophy is overtly apparent in A Tale for the Time Being, but I can see the beginning of this inquiry in my first two novels, My Year of Meats and All Over Creation, which are very concerned with the interconnected nature of our lives in the world.

Zen practice has changed the way I write and has helped me continue writing. Part of my struggle was that I’d reached a point as a novelist where I could no longer trust my voice in the world. I felt like my writer’s voice had become wobbly, unreliable and untrustworthy. I suppose it was a crisis of faith. Zen practice provided a philosophical and ethical ground, a trustworthy foundation, for my writing practice. Or to put it another way, it helped me grow a backbone.

So I would say that my Zen practice and my writing practice are the same, but of course, in practical terms, the roles of writer and priest are very different. For one thing, I do not wear Zen robes when I write. I wear a black turtleneck sweater and a pair of overalls. And I sit at a desk in front of a computer, rather than on a cushion in front of a blank wall. And when thoughts arise, I write them down rather than letting them go.