How To Stop a Bullet 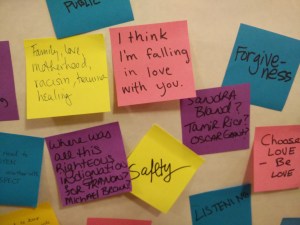 (reposted from The Writer in the World, the blog for the Goddard College MFA in Creative Writing Program)

On the plane headed to the Goddard residency in Port Townsend last week, I watched The Music of Strangers, a documentary about the international Silk Road Ensemble established by the cellist Yo-Yo Ma in 1998, but more than that, about the role of art in the world. One of the musicians, Kinan Azmeh, a refugee from Syria, spoke of watching his country in crisis: “I found myself experiencing emotions far more complex than I could express in my music. The music fell short. I stopped writing music. Can a piece of music stop a bullet? Can it feed someone who is hungry? You question the role of art all together.”

Since our election, I too have stopped writing. Everything I might say about what is going on around me has felt thin, and redundant. Anything I’d begun in the past seemed irrelevant and the act of continuing to write it – which requires turning away from the horror show of the news – vaguely disloyal and privileged. I have been living in a liminal space, making phone calls and going to community meetings and protest marches, while I wait for something to break open so that I can find my voice again.

When I got to Goddard, I found, as always happens in a gathering of writers, that I was not alone. Although the theme for our residency was Risk and Revelation, it quickly became clear in the keynote presentations that our conversations would swirl instead around writing and resistance. My colleague Keenan Norris spoke of illiteracy as the “disastrous inability to describe what is before us.” Bea Gates spoke of “the need to unravel the horror before it unravels us.”

But it wasn’t until Keenan evoked Ralph Ellison’s comment that there is no peace in art but only “a fighting chance at the chaos of living” that I was reminded of the truth I already knew: the hate and violence, exclusion and separation that is currently imperiling our country is as old as recorded history, and it has always been my subject. It is the Japanese American internment my family endured; the dropping of two atomic bombs. Racism has been a part of us for centuries – in exclusion acts and Patriot Acts; redlining; prison for profit; slavery; colonization; outright theft of home and country. The difference now is not in degree but in speed. Thanks to the Internet, our world assembles itself out of a continuous pinging of tweets, posts, petitions, and action alerts that insist there may literally be no tomorrow if they are not immediately followed and shared. In her keynote, Bea talked about “Living inside a picture I could not see or read” and that was me: plucking what I could out of the torrent of scrolling insults, lies, jokes, leaks, and rumors, all conveyed in the truncated language of emoji and emotion, as if the world was at stake, and the right retweet would save it.

As Keenan reminded me by sharing the words of writers who have come before – Ellison, Hannah Arendt – the world is always at stake. And what’s more: “In art,” he said, “of course, each singular human life is the world— the world in a grain of sand.”

We writers traffic in the singular human life. My own books evoke racism, internment, bombings and trauma, through the choices, fears, actions and sacrifices of individuals. I interview people to create my worlds. I know myself well enough to know that everything I will ever write will begin with blood, breath, tears, joy, memory. Not as immediate as a tweet, in fact, just the opposite: writing from the body and visceral experience is quite a slow process, but perhaps it is no coincidence that creating a lasting society rooted in justice and humanity also takes time. So many of the readings we heard at the residency were prefaced by, “I wrote this [in some past moment in history] but it seems more important than ever now.”

With all of this so much on my mind, I facilitated a discussion for students and faculty to talk over where we, as writers, go from here. Borrowing from the post-it note explosion in the New York City subways after the election, we used a color-coded system to navigate the layers of our experience.  The shock and awe of fake news and the fight or flight cortisol spikes of the resistance came out in the first two. That cleared some room for us to explore what matters most to us second two:

1: WTF?!!? Say something. Get it out. Whatever blurt you are feeling right now, as a writer in the world, write it. (purple)

2: WHAT THE WORLD NEEDS NOW: What’s urgent, necessary, essential? (This is global.) (blue)

3: HOW ABOUT YOU? What are your own urgent themes, your preoccupations? What themes, situations and fears have you ALWAYS explored in your work? (yellow)

The exercise took us through the stages of anger and fear, to sorrow, and then to love: where even our heartbeats slowed as we reconnected with what we lived for. That glorious and felt experience of living is, I believe, what our current climate of fast fear is trying to replace. The project was a powerful way to remind ourselves of the role of art, and the reason we write in the first place: to locate our humanity and make meaning.

I invite you to write your own post-its and add them virtually to our wall by sharing them in the comments on the Goddard MFA in Creative Writing blog: thewriterintheworld.com.